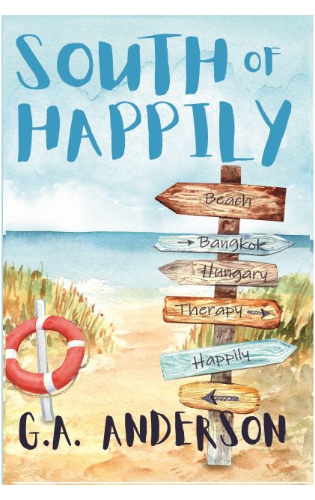 South of Happily is that book. The one you’ll talk about until your friends finally read it too; and then you’ll talk about it some more, together. Funny, sad, smart, and profound: it’s a tale of what it means to accept your family for who they really are. Anderson keeps us turning pages, unable to put the book down until the end. And then you miss the star, Katy Kiss. You wish she was real, that she lived nearby so you could meet her for coffee and find out what happened after all that.

In the coastal town of Dufferin Beach, Katy Kiss wants more from life than flinging food in her family’s Hungarian restaurant. She’s searching for the hope she had as a child when her immigrant grandmother would pinch her cheek and say, “go finding your happily.”

But Katy isn’t feeling the hope with her philandering husband who communicates in angry emojis now that their marriage is headed to divorce court. And if she’s being honest, even on her wedding day, the only thing she felt was queasy, like when you eat bad shrimp.

Therapy might get her closer to happily, but surviving fifty minutes of psychological interrogation is hard without obsessing about raspberry donuts or wondering why the couch, carpet and wall color in her shrink’s office are all the same shade of kill-me-now-beige...or why every decision she makes is wrong.

When a crisis sends her far away from home, the secrets hidden in the Kiss family closet begin spilling out. Secrets that change everything Katy knows, and suddenly, finding happily is the last thing on her mind.

Gaby Anderson is a first generation Hungarian-Canadian, born in Montreal, Quebec. When she was a year old, her family moved to New Jersey, then Paris, back to Canada, and finally to the U.S. where she's lived ever since.

Her first memory of writing is from elementary school. After getting into a fight with a friend, she composed a story about turning her into a potato. Eventually the two made up, but the spark was lit, and a writer was born.

After college, her dad read a short story she'd written.

His response was, "You're no Shakespeare, but keep going."

Gaby has worked in the restaurant industry, commercial and group travel, private aviation, and pharmaceutical instrumentation. She currently works in behavioral health management.

Her husband calls her a Renaissance Woman with mad-skills.

This means she can catch a softball with one hand while holding a giant turkey leg with the other.

Recommended by G.A. Anderson for fans of:

By nine o’clock that night, the runway is sliding away from me again, along with the billion twinkling lights of Bangkok. The wheels retract into the belly of the third aircraft I’ve been on in the same number of days. My parents, with fake smiles plastered across their faces, shoved me on my way like I was part of the zombie apocalypse. It was hurtful, confusing, and now I have a good twenty-five hours of travel to mull over why they so desperately needed to be rid of me.

I contemplate their dismissal as we climb into the clouds. The big aircraft hasn’t reached cruising altitude when I fall asleep next to a young man watching Anime on his laptop. He’s still at it when I wake up. He studies my face for a moment, then with no acknowledgment, turns back to his hot Asian cartoon.

“Beautiful,” I mumble to myself as his indifference washes over me; one final rejection stinging only as an addendum to an already stellar day. .

The second flight, from Frankfurt to Tampa, is more crowded, and my last minute reservation has secured the shittiest seat assignment possible, between two large German men. They’re clearly acquainted and perhaps thought taking the window and aisle would improve their chances of an open space between them. They’re polite, and I’m willing to act invisible for the next ten hours if it guarantees they’ll leave me alone.

“Are you German?” Man in the window seat asks.

“We are going to Tampa Bay.”

I slump in my seat. Nobody from Tampa says Tampa Bay, only an outsider or the Weather Channel would use this vernacular. No homegrown Floridian would say it, not even someone from Georgia or Alabama. I glow with superiority, then move on to feeling petty, judgmental, shallow. And guilty. Just like Dr. Jonas said that first day of therapy. I wonder if she was on to something.

“To a scientific conference.” Man in the aisle seat informs me.

“That’s interesting,” I say, fishing through my pockets for earbuds.

“Have you enjoyed our beautiful country?” Window asks.

“I was in Thailand.”

They grin at each other.

“Would you like to sit together? I can switch places.”

“No-no, this is fine,” Aisle says. “The beach areas are first class.”

“You were not there for pleasure, then?”

Aisle says something to Window. Their body language and my limited knowledge of German communicate their dissatisfaction regarding my unfriendly demeanor. Any other day I’d be a better sport, pleased to chit-chat about Florida’s best vacation spots, bars and beaches. Not today, though. I can’t be the in-flight entertainment.

The rest of our journey is long. Turbulence keeps me from sleeping. Aisle spills two cocktails on himself. Window tramples over me once per hour to avoid blood clots or stroking-out.

By the time we begin our descent into Tampa, I super want to kill them both.