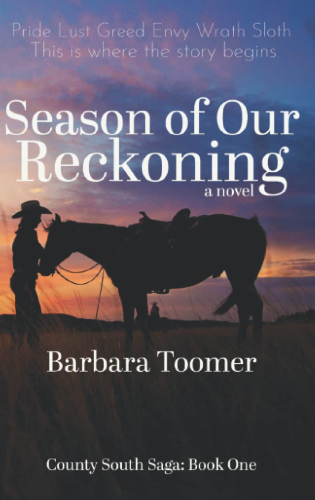 Season of Our Reckoning

Pinched between the toothy grin of the Mineral Hills and the alkali dusted Badlands sits the only piece of frontier real estate that matters in the war for domination on the windy plains.

Harrison Hayes is building the biggest cattle ranch in County South. Ten years of back-breaking work and calculated risks gives him the arrogance to kick aside anyone that gets in his way.

Kit Champion, accepting the government's invitation to challenge Hayes' prideful presumptions with a 160 acre land grab, intends to prove up his homestead claim. Righteous entitlement won't let him back down.

In the age-old battle for boundaries the dirty player usually wins. When a cattle baron pits his pride and grit against the wrath and envy of a misguided homesteader the price for victory becomes unimaginable.

Set in America's post-war restoration years on the uncivilized high prairie plains Season of Our Reckoning is a compelling love story of two fate-made marriages each trying to survive while the munitions of range war explode around them.

Failing to heed the warnings on the dark winds of change leaves Hayes vulnerable. He stands to lose everything to the scythe of progress and the greed of man.

With a fool's brag and unworthy mettle Champion goes to far unaware he's poked the reigning despot in a kingdom where the weak will not survive.

How far will a husband go to construct his wife's untenable fantasy of happy-ever-after? What unthinkable measures will a man take when his hearth-and-home are threatened?

Barbara Toomer grew up a Forest Service brat living in many forest regions throughout the Rocky Mountains. In marriage she settled in Wyoming on the windy plains, a place she’s grown to love. Barbara, a successful research journalist and non-fiction author published under the name Kaye Bailey, is now focused on fiction. She writes stories about the place and way-of-life she treasures. Between paragraphs she enjoys time with her husband, Jim, at their Wyoming home where views are wide and sunsets are transforming. Together they’ve carved out their own little piece of the American West.

Recommended by Barbara Toomer for fans of: