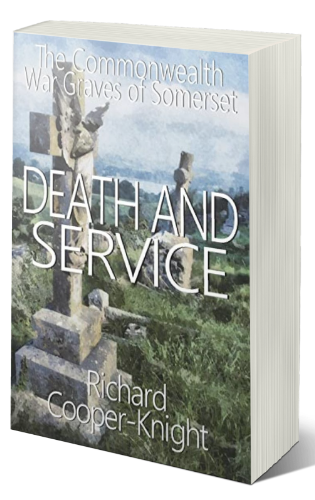 Death and Service: The Commonwealth War Graves of Somerset

There are more than 800 First World War graves in over 240 cemeteries and churchyards across Somerset.

Each of the names on those gravestones has a story connected to it, a story of family and of tragedy, a story of life on the battlefield and of love on the home front.

These were men and women from over sixty regiments, drawn to the cause from all corners of the Empire. They were wounded in battle or succumbed to disease, they were caught up in accidents or died at their own hands. These were soldiers of all ranks, age and class; brave pioneers of aviation; people seeking adventure on the high seas. Above all these were hopes, dreams and aspirations lost, cut tragically short for King and Country.

This book aims to shed light on the servicemen and women behind the names on these gravestones, to bring those long-forgotten names to life again, a century after they were lost.

Based in Somerset, Richard has had a love for photography for more than 20 years, building a long-lasting blog and rescuing antique photographs and cartes de visite from junk shops.

A keen amateur genealogist, he has drawn his two passions together, researching First World War graves in the churchyards and cemeteries across the south of England.

When not traipsing around muddy graveyards, Richard has a penchant for real ale and folk music.

Recommended by Richard Cooper-Knight for fans of: