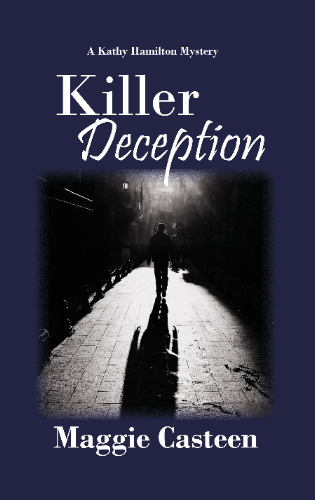 The first book in the Kathy Hamilton Mystery series...Killer Deception. A stolen sapphire necklace, a murdered CEO, and a bereaved widow. Crimes that have gone unsolved and Kathy Hamilton finds herself caught in the middle of it all. The killers are still out there, with little evidence to go on and the police trying to use her for their own means. Will Kathy be able to find the truth, and will she be able to see through the deception around her? Kathy will follow the clues no matter where they lead. Filled with twists and turns, Killer Deception is the perfect mystery to curl up with. An exciting read for all readers of mysteries, if you love a good mystery...Killer Deception is for you.

Maggie Casteen is a North Carolina native. She grew up in Greensboro, NC and moved to Rose Hill, NC about 15 years ago. She earned her Bachelor's degree in graphic design from Campbell University and graduated with honors. Maggie has worked as a librarian and as a graphic designer in the newspaper and commercial printing industry. When she's not writing she enjoys painting, taking long walks with her dog, Dakota, and of course a good mystery. She published her first novel, Killer Deception, in 2020 and is currently working on more ideas for the Kathy Hamilton Mystery series as well as other fiction book ideas. Maggie also uses the pen name Elisabeth Casteen for her non-fiction work. To find out more information on this series and other books by Maggie Casteen please visit www.authormaggiecasteen.com. Follow the clues....to your next great read.

Recommended by Maggie Elisabeth Casteen for fans of:

There were no more lights at BrookCore Investments between the corner of Maple Avenue and Rosemont Commercial Park. Even the cleaning crew had gone home for the night. The night however was not over for two shadows on the tenth floor.

“I told you to be careful. Don’t leave anything behind.” A man’s voice came out of the dark. He had planned this too perfectly for anyone to screw this up, not when he was so close.

“I heard you the first time. Now lower your voice or you’ll be the reason we get caught, you know security is still on the premises.” They were almost scot-free and here he is giving out orders as if they had not rehearsed this plan over and over. How typical; that’s all he can do is hand out orders. Well, we’ll just see how long that lasts.”

“Fine. . .just don’t forget that bottle and grab those glasses too.” He said. The two shadows quickly straightened the papers lying on the desk, took the empty bottle and glasses and silently left the way they came.

A third figure was still in the room sitting at the desk. The CEO of BrookCore Investments sat hunched over hidden in the dark. It would be eight hours before anyone would notice he hadn’t gone home that night. Eight hours the killers would have to get away undetected.

It was a bright Friday morning when Kathy woke up still not a hundred percent after the long hours she had put in researching her pet project at the Rosemont police department. Rosemont, North Carolina was a decent sized town that boasted a little over 40,000 residents with enough shops and attractions to keep life interesting. It was in the middle of the state and the only home that Kathy had ever known. Pinehurst Street, home to Kathy and her father Dr. Hamilton, was one of the many suburban roads that could at times be awful quiet especially for an adventurous twenty-one year old who was always full of questions.

She slowly got out of bed and went to her closet. She finally pulled out a pair of jeans and an orange t-shirt. As she took a look in the mirror she picked up her locket and fastened it around her neck. It was the last thing her mother had bought her, she never left without it.

Kathy came downstairs and found her father already at the table. Dr. David Hamilton, in his mid-forties with brown hair and eyes, was a top medical researcher for the Belmont Research Group and as regular as a clock. In his line of work it paid to be so.

“Up already” he said only half joking.

“Funny. It’s not quite ten o’clock and I did pull an all-nighter. People who pull all-nighters need more sleep.” Kathy said as she poured a cup of coffee.

“Very well if you say so but that’s not the strongest argument I’ve ever heard.” Dr. Hamilton grinned as he put the newspaper down

and buttered another piece of toast.

“Well, I did just finish my last semester of college thank you very much and,” she said as she began to pour syrup on her French toast “I’m on track to become the greatest investigator ever.”

“Well let’s back up and get through graduation first...then we’ll see about becoming the next Sherlock Holmes” he said as a smile crept on both of their faces. “At the rate you’re going you’re likely to catch fire.” Kathy gave him a sideways glance as she continued to eat her French toast. “Kathy just make sure you don’t overdo it” he added.

Kathy rolled her eyes “This coming from a researcher who works how many hours a day?”

“Point taken. See you later.” He grabbed his blazer off the back of his chair, picked up his briefcase and hurried out the door. Kathy got up for a second cup of coffee when the phone rang; it was her best friend Stacey wanting to know when she was going to be at the library. Kathy scolded herself and reassured her that she would be there in thirty minutes.

“Well I guess this coffee is to go” she said as she grabbed a cup from the cabinet and then decided to grab another. “This ought do it” Kathy said as she poured two cups of coffee and headed for the library.

Kathy walked through the oak doors of the public library and breathed in the mixture of books and coffee. The Rosemont public library was one of the older buildings in town but Kathy had quickly become a regular. She loved this place and had spent a lot of time here over the years reading and doing research. She walked past the front desk and saw Stacey at a table in the back next to the magazines.

“There you are” Stacey said as she turned around. At 5’6” with her brown hair in the feather cut she loved so much they both had been friends forever. However, Stacey was prone to throw herself into work ever since her parents got divorced several years ago. Kathy had always felt closer to Stacey because of that, her parents weren’t together either.

“I know, I know but I have coffee.” Kathy smiled as Stacey’s eyes lit up.

“Coffee huh? You think a cup of coffee is all it takes” Stacey said eyeing the cup in Kathy’s hand.

“Give it here” she said as she grabbed the cup Kathy handed her as they sat down on either side of the table. Stacey was doing research for an article on real estate scams and had somehow, as usual, talked Kathy into helping. Kathy could see the piles of newspapers and files Stacey had already managed to collect. Kathy just smiled to herself; if there was something there Stacey would definitely find it.

“If you could look through these newspaper clippings I can start on these files.” Stacey said as she slid a stack of clippings over to Kathy. “I had no idea they could locate so many files, they’re usually not this helpful.” Stacey quipped as she took a note pad from her bag and started to take notes. After a while the newspaper lines started to blur together so Kathy looked at her watch, twelve-thirty she was supposed to meet Michael for lunch at one. Kathy slid her notes over to Stacey and promised to give it another shot later.

“That’s ok. . .we both could use a break and I need to make sense of what I have so far.” Stacey grinned “Tomorrow?”

“Tomorrow it is, call me up.” Kathy said as she grabbed her coffee cup and her bag as she headed for the door.